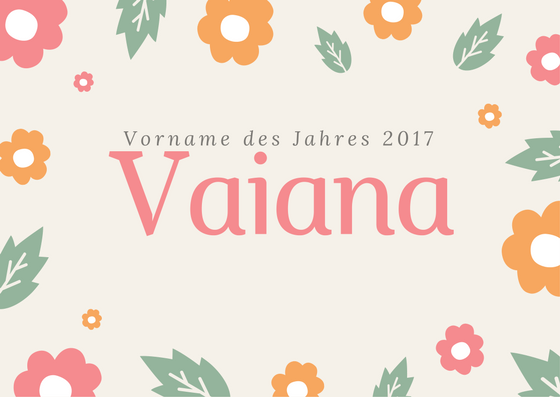 To choose the “first name of the year”, I was again looking for a name that is somehow special for the current year. In previous years I chose Elphi, Samu, Neymar and Kathalea; this year Alexa and Donald were proposed to me.

I chose Vaiana, the name of the heroine of the Disney film Vaiana – Das Paradies hat einen Haken (original title: Moana), which had its German premiere at the end of 2016. “The name should be very well received in Germany,” Annemarie assumed in retrospect and hit the mark. According to my preliminary projection, more than 90 girls in Germany were named Vaiana in 2017. It hasn’t happened for a long time that a previously completely unknown name hit so hard. Something similar happened in 2011, when many girls were named Zazou; the name was made public by a participant in the casting show “Deutschland sucht den Superstar”. 2012 was not only the career of the singer at the end, but also the wave of success of her first name. I wonder whether Vaiana will prevail in the long run.

Incidentally, Vaiana is the Polynesian film princess’s name only in Europe. The name Moana from the original American version of the film could not be taken here for legal reasons.

What else is the situation with the names of the Disney movie heroes in Germany? Elsa and Anna are out of competition because these first names were already very fashionable before Frozen. Merida appeared in the first name statistics in 2013 (the film was released in summer 2012) and is still rarely, but regularly awarded. Similar to the name Tiana (from The Princess and the Frog, 2009), which was also in use before the film was released. Rapunzel, Mulan, Pocahontas and Arielle have left no significant traces in the German first name landscape.

The surprise winner in this small competition is Aurora. Disney’s Sleeping Beauty has climbed into the top 200 of the most popular German girls’ names. Sometimes it takes a little longer with the fashion names: The film Sleeping Beauty was released in 1959.