Nazi names, this subject sounds more exciting than it is. The first names that were most often given in Germany from 1933 to 1945 are by and large the same as those that were common before and after. Only the first name Adolf was awarded noticeably more frequently in the years after 1933 than in previous years. This name was at the height of its popularity at the end of the 19th century and has been in a downward trend ever since, so that in the early 1930s it no longer belonged to the Top 50 of the most popular boy names. In 1933 the first name Adolf was in a leap up, but more than a Top 40 ranking was not possible.

In 1934, the name Horst was the most frequently assigned boy name in Nazi Germany. Some historians claim that this was because the propaganda of the National Socialists portrayed Horst Wessel as a martyr. I do not share this view. In fact, Horst appeared as a first name already at the beginning of the 20th century in appreciable numbers and became more popular from year to year in the following years – long before the alleged martyr’s death. Starting from 1934 fewer boys were called Horst from year to year. This trend corresponds to a completely normal fashion name career, the data for the name Günther, for example, looks almost exactly the same. 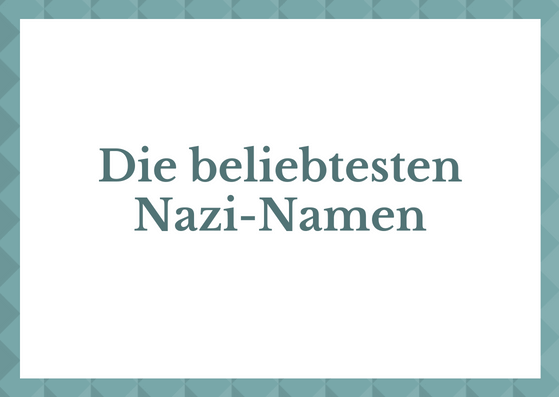 By the way, Nordic first names – contrary to widespread prejudices – are not typical Nazi first names. On the contrary, they were expressly not wanted.

Besides the unwanted ones, there were also directories with first names desired by the Nazis, especially those of German or Germanic origin. I compared such a directory with my current first name collection (born in 2017) and found out which of the first names recommended by the Nazis are the most popular nowadays:

In addition some other first names with “foreign” origin had a chance to be recommended by the Nazis. It was important that they had been common in Germany for a long time. I also compared these names with my current collection: